Orange and blue were adopted as the University of Virginia’s official athletic colors at a mass student meeting in 1888. UVa athletic teams had previously worn silver gray and cardinal red, but those colors did not stand out on muddy football fields, prompting a student movement to change them.

One of the students attending the mass meeting was Allen Potts, a star athlete who played on Virginia’s first football team in 1888. Potts showed up at the meeting wearing a navy blue-and-orange scarf that he had acquired during a summer boating expedition at Oxford University. Orange and blue were chosen as the official athletic colors after one of Potts’ fellow students pulled the scarf off Potts’ neck and, waving it to the crowd, yelled, “How will this do?”

”The Good Old Song” was written in 1893. Sung to the familiar tune of “Auld Lang Syne,” it has since served as UVa’s unofficial alma mater. Although the words to the song are attributed to the late Edward H. Craighill, Jr., ofLynchburg, Va., Craighill wrote in the October 1922 issue of the University of Virginia Magazine that “no one man should be credited with the authorship” of the first stanza. He said it was a byproduct of a welcoming home of a victorious football team and was the joint production of several students. The cheer “Wah-hoo-wah” was in vogue with the student body and was incorporated into the song.

The song is most frequently heard during home football games as Cavalier fans stand and sway, arm-in-arm, singing “The Good Old Song” after each Virginia score and at the end of the game. The song is also sung at numerous other UVa athletic events and University- related functions.

The origin of “Wah-hoo-wah” is uncertain. The cheer was used to root on Virginia teams as early as 1890 and may have been borrowed from Dartmouth College, whose athletic teams were once known as the Indians. Legend attributes the yell to Natalie Floyd Otey, who sang the ballad “Where ‘er You Are, There Shall My Love Be ” at Charlottesville’s Levy Opera House in 1893. The predominantly student audience noticed that Otey warbled the first three words of the song between each of the stanzas and decided to join in the refrain. By evening’s end, goes the legend, the crowd had corrupted “Where’ er You Are” into “Wah-Hoo-Wah.” The Levy Opera House stood at the corner of High Street and Park Street and has since been renovated into an office building.

Virginia’s athletic teams have been accompanied by a somewhat confusing array of nicknames. The most prominent and widely accepted of these monikers are “Cavaliers,” “Wahoos” and “Hoos.” although “V-men,” “Virginians” and “Old Dominion” also have been used to refer to UVa athletic teams through the years.

Legend has it that Washington & Lee baseball fans dubbed the Virginia players “Wahoos” during the fiercely contested rivalry that existed between the two in-state schools in the 1890s. By 1940, “Wahoos” was in general use around Grounds to denote University students or events relating to them. The abbreviated “Hoos” sprang up later in student newspapers and has gained growing popularity in recent years.

In 1923, the college newspaper College Topics, held a contest to choose an official alma mater and fight song. John Albert Morrow, Class of ’23, won the alma mater contest with “Virginia, Hail All Hail,” while “The Cavalier Song,” written by Lawrence Haywood Lee, Jr., Class of ’24, with music by Fulton Lewis, Jr., Class of ’25, was chosen the best fight song. Although both songs failed to become part of University tradition, “The Cavalier Song” inspired the nickname “Cavaliers.”

Virginia’s first mascot was a black-and-white mongrel dog named Beta, who was cherished by the University community in the 1920s and ’30s. The canine was named after the Beta Theta Pi fraternity, which bought his license at least once. Considered no less than a member of the student body, Beta pursued a wide range of interests–from football to scholarly discourse.

He was welcomed at most University functions, including dances, fraternity parties and lectures. He attended a course at Cabell Hall about Plato so frequently that his name was called in the roll, at which time he would bark out his presence. His most famous exploit came after being left behind in Athens, Ga., following a UVa football game with Georgia. It was not until two weeks later that a scratch was heard at the back door of the Beta House, and a cold, ragged and hungry Beta stood there. It is not known how he found his way home. As befitted a dog of his stature, Beta enjoyed a great deal of notoriety. Hailed by the University as the nation’s “No. I college dog,” he was mentioned on a nationwide broadcast of the Pontiac radio show and appeared in Look magazine.

On April 6, 1939, Beta was hit by an automobile and had to be put to sleep. An estimated one thousand students marched in the funeral procession from the Beta House (now Delta Upsilon) to the University Cemetery. 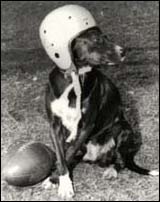 Seal, a cross-eyed black mongrel mutt, continued the University’s tradition of dog mascots in the mid-1940s. His sleek coat of fur earned him the name Seal, and he later became known as the “Great Seal of Virginia.”

The beloved mascot was allowed in UVa lecture halls and nearly everywhere else around town. Even local restaurants with signs reading, “No Dogs Allowed,” wrote below in parentheses, “except Seal.” He was fed by different fraternities as well as the University Cafeteria and could often be found at the home of the late Dr. Charles Frankel, a long-time football team doctor at UVa.

Seal’s claim to fame came in 1949 during halftime of the Pennsylvania football game at Franklin Field in Philadelphia. Wearing a blue blanket embossed with a large orange “V,” Seal walked from the 50-yard line to the Pennsylvania sideline where the Penn cheerleaders had placed their megaphones. The rest of the event was recounted as follows in the Cavalier Daily. “Slowly he walked from midfield to the Quaker side. Indifferently he inspected their cheerleading appurtenances. Eighty thousand people watched with bated breath. Coolly, insolently, Seal lifted a leg–the rest is history.” Virginia went on to win its seventh straight game of the season 26-14 and Seal later came to be known as Caninus Megaphonus Pennsylvanus.

Seal was about 10 years old and suffering from an internal rupture when a local veterinarian, Dr. W.B. White, put the “Great Seal of Virginia” to sleep on December 11, 1953. Approximately 1,500 people joined the funeral procession from the University Hospital to the University Cemetery where Seal was laid to rest beside Beta. No other canine has since been accepted as the official mascot.

In 1963, the University mascot became a bare-faced horseback rider in Cavalier garb. Both the horse and rider were furnished by the UVa Polo Club. However, the mounted Cavalier and his horse parted company in 1974 with the inception of AstroTurf at Scott Stadium.

From 1974 to 1982, the Cavalier performed on foot. The ‘Hoo, an orange-costumed mascot, made a brief appearance in 1983 but did not capture the support of the student body. The costumed Cavalier with a large character head debuted the following football season in 1984 and has remained the official mascot of the University.

The Cavalier performs with the UVa cheerleaders at all football and men’s and women’s basketball games as well as various other University-related and athletic events. The Cavalier is selected from the student body through open tryouts. The mounted Cavalier made its return in the Florida Citrus Bowl at the end of the 1989 football season.

Due to its instant popularity, the Cavalier on horseback returned the following season on a regular basis and continues to lead the Virginia football team onto the field at the beginning of all home games.

Long popular with Virginia supporters, the “split V-Virginia” logo was adopted as the official logo of the UVa athletic department in 1995. The logo is trademarked and appears on officially licensed University memorabilia. Editor’s note: The V-Sabres logo replaced this logo as the official UVa athletics logo in 2005.

In addition, the “V” over two crossed sabers (or V-Sabres) is often used to represent the Virginia football program. The logo first appeared in 1994 as part of the Cavaliers’ new football helmet design. It was designed by head football coach George Welsh’s son, Matthew, who received a bachelor’s degree in studio art from UVa in 1994. This logo has now become the most marketable symbol of Virginia athletics. Editor’s note: The V-Sabres became the official athletics logo in 2005.

The “serious” Cavalier, designed by local graphic artists Jim Gibson and Charles Peale, served as the official logo of Virginia athletics from 1984 to 1994.

Various other logos have represented Virginia athletic teams through the years, including the comical “Yosemite Sam” Cavalier.

Cut To The Chase

I Have Become An Activist